Everybody knows that a matching network can be built using a quarterwave transformer. E.g. if a load of impedance \(Z_L\) shall be matched to a source having impedance \(Z_S\), this can be accomplished by using a transmission line with an electrical length of 90 degrees and characteristic impedance \(Z_0 = \sqrt{Z_S\,Z_L}\). However, is this also possible using lumped elements?

Yes it is! Remember that \(Z_0 = \sqrt{\frac{L}{C}}\). So, there are basically infinitely many combinations of \(L\) and \(C\) which give a desired characteristic impedance, but we can choose 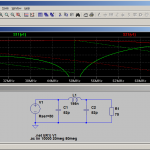 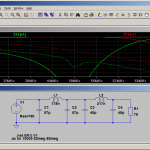 Consider the following network where the source and load impedances are labelled R1 and R2: 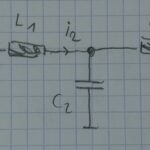 With the aid of the mesh rule (voltages around a loop add to zero), the currents in each of the loops can be found using the impedance matrix

With the Matlab script attached, matching networks of this type with arbitrary number of elements can be calculated and S11 and S21 are plotted as follows: 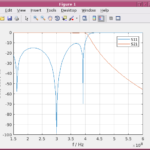