I have a good old HP 8753C vector network analyser in my shack, however, I miss a proper SOLT calibration kit. Here is how I built my own calibration kit and made a model for the 8753C.

The original idea is from Claudio, who also helped me with the numeric model for the calibration standards by sending me his files. Thanks for that!

The calibration kit looks as follows: 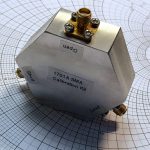 It is made of a hexagonal piece of aluminium which serves as a handle. For a better look, I milled off a tiny bit from the surface. Then, the three different standards are made as follows. For the “open” standard, a hole is drilled into the aluminium. Then, a standard SMA flange connector is face grinded and mounted in front of the hole. 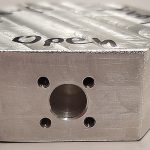 On the other hand, the “short” standard is a small piece of copper, soldered directly on a SMA flange connector. For the “load” standard, I have used two precision RF resistors of 100 ohms.

The connectors are screwed to the handle with M2.5 Torx screws. (I like Torx 🙂 ).