I tested my GPSDO by comparing it with my Oscilloquartz STAR4.

According to Lady Heather, the STAR4 is well locked and sees around 8 sats, which is fine. 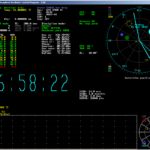 My GPSDO seems to be locked as well. Since I use a FLL, there is no real way to tell whether it is “locked” or not… 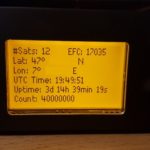 Besides that I tried differen PLL settings for the microcontroller. First I used the maximum clock rate, i.e. the microcontroller runs at 72MHz from the OCXO. This had the advantage that the resolution of the frequency counter was quite high. However it turned out that the PLL is not stable, i.e. it has some kind of frequency modulation at its output. This thread in the EEVblog forum shows some measurements on this topic.

So first I stopped using the PLL, but that turned out almost useless because the counter resolution is only 100ns then. So I tried to figure out different PLL settings, and it appears as if the PLL multiplication factor is an even number, the stability of the PLL seems to improve. So I made some tests using a multiplication factor of 4, i.e. the frequency counter resolution is 25ns and this is also why the above picture shows a count value of 40000000.

I connected the 1PPS output from the STAR4 to my ‘scope, as well as the 10MHz output of my own GPSDO. Then I used my GoPro camera in time lapse mode to make a video of the GPSDO signals. I used 1 picture / 10 sec, while the ‘scope was set to 20 ns/div.