I always wanted a HP 8970B noise figure meter to measure the noise figure of some amplifiers etc. However, these usually go for stiff prices, but recently I found an unit on eBay which was quite cheap.

It was so cheap because, according to the seller, it had errors during power-on, namely the error E20. I quickly looked up in the service manual and it appears as if E20 is related to the calibration, so it can most likely easily be fixed. So this was the unit as listed on the ‘bay: 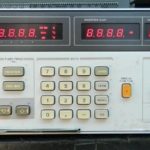 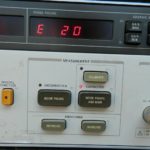 The unit was sold as ‘defective / for parts’ and the shipment to my place was even more expensive than the meter itself 🙂 so I got the meter, and it was really well packaged (often, these instruments get bent N connectors due to poor packagin!). This is how I received it: 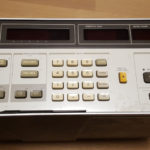 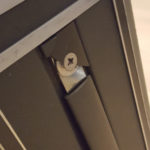 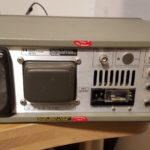 So quite good condition, besides the usual goo and dirt. Since I knew how to fix E20, I also hoped that there are perhaps some more things to fix, and I was excited to do a repair soon 🙂

However, all I did was to change the line power module for 230VAC, switch the unit on and press PRESET – self test passes, and no error displayed! 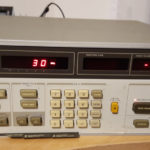 Apparently, someone has already been in here, since the EPROMs are missing their stickers. 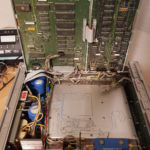 I immediately made a dump of the EPROMs (Firmware date 02725), it is available in the downloads section.

Fortunately, my unit seems to be one of the newer versions having a coin cell instead of a soldered battery! 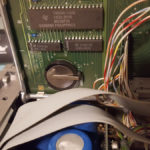 I borrowed a HP 346C noise source from my workplace and performed the calibration of the noise figure meter.

Since I don’t have my own noise source, I will build one some day 😉